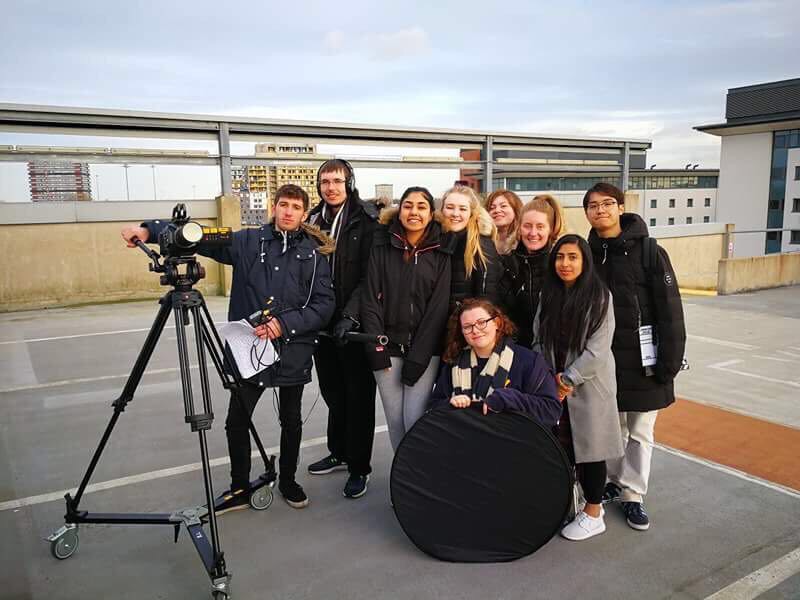 I, as an international exchange student, found that filming in England is quite different compared to China. As a first assistant director, I learned how to communicate effectively with other crew stuff from this session, the crew itself and my research.

Before I came to the UK, I have made some short videos including documentary, music video, and short film. Also, I finished my first short film during the placement period in Shanghai which acted as a first assistant director as well.

As to the difference, culture is the most obvious one. Then, it should be filming approach from pre-production to postproduction. I need to compare, analyse and learn something different. And that’s why I’m here in Coventry.

To me, reading and understanding the meaning of script is vital in pre-production stage whether in China or England. After the first time reading script of JUMP, I recognised this is a kind of comedy immediately. But I think it’s not funny enough. As a result, I did some research on Wikipedia. It turns out that this kind of film is a dark comedy, which is a ramification of black humour. Dark comedy put more emphasis on criticising the society by containing irony or fatalism. Comedy is quite popular in China while many people don’t know the concept of dark comedy.

Reading always be the beginning in both England and China, but the difference is the way you read. Here, I found a useful and effective way to read a script; it only takes you three times.

-The first time also on the first day, just read it through and make some notes about points. Then write down your name and phone number which securing the “identity” of a script. (Keep the script secret is significant when you involved in commercial work.)

-In the Second time, you may highlight some details that are worth to be mentioned. More importantly, record all the questions about your doubts next to the paragraph. This way could make your pre-production process professional and efficient when you are communicating with other crew members.

-The Last time, you can try to breakdown the script.

After reading, it’s the time for the crew to make a schedule. We do face panic when we can’t stick to the table, and we have to pay for the stuff money for one more day. Suffering panic is my fault to some extent. But this experience really taught me a lot. Then I started to do the research more specifically.

Finally, I got the concept of “locked script” and the coloured paper.  These are the concept that I have never heard before.

A script shouldn’t be fixed, as well as the schedule. Inevitably, we will meet some problems that we can’t easily handle during the production. The key to solving them is keeping communication and avoid re-do breakdown. In order to reduce the time of breakdown, applying the colour paper into the work-flow is practicable.

In terms of coloured paper, I found that there are two systems. (the USA and the UK system) Using this way can reduce the possibility of being messy. Basically, when you make a change to the script, just use the different coloured paper. And here comes the standard order role:

This method is really different from my the one I used before, which based on the order of number. But unfortunately, this time I didn’t take this method. I found it after the production period when I think my work still needs to be improved. So, next time, I will try to use this method to improve my work.

By the way, the 1st Ad should make a call sheet before start filming. I choose to combine it with the schedule because for this project, we only have three scenarios, two actors and it just takes us two days to finish production period. At the end of the first day, our actors didn’t complete their task, but we tried our best to communicate with them (actors and the administer of carpark) and solved all the problems in the second day. Maybe not making a call sheet isn’t a smart decision, but I think it depends on the complexity of script.

When it comes to the production period, all the crew members were working together. As a first assistant director, my first and the most critical task is to keep the continuity. That is to say; when the actor moves from one scene to another, the 1st AD should help the director to keep lights, costume, makeup, etc. same. So, when we meet any problems, I will be responsible for coordinate the crew members to solve problems. Only communicate smoothly can prevent the goof when we are editing.

This is the most excited production period, I think. Because we have finished most part of our film. After the rough cut came out, all the crew members had production meetings talked about their opinions, which is the same compared to the process in China. My task during this stage is to discuss with director what needs to be modified and sort out our thoughts.

Although we, as a group, met a lot of problems. We do tackle all of them by communicating with each other patiently. For me, the experience of shooting a film cooperated with classmates from different parts of the world is brilliant. After this production, I realise the importance of research, collaborating with others and self-reflection.

At last, let me quote a motto which inspired me a lot during pre-production by Abraham Lincoln.

Give me five hours to cut down a tree, and I’ll spend three hours sharpening the axe.

A Chinese Filmmaker. Like Documentary and different art. View all posts by kratewong

We’re now editing this film and it will coming soon!